Sept. 14, 2017 – Richmond, B.C. – A new facility to test carbon capture and conversion technologies is operational thanks in part to investments by the Government of Canada and the Government of British Columbia.

The new BC Research (BCRI) Technology Commercialization and Innovation Centre is home to the Carbon Capture and Conversion Institute (CCCI) and BCRI who together offer a unique blend of experts, pilot plant, and laboratory space for the development of technologies to reduce industrial greenhouse gas emissions.

This venture will help grow Canada’s clean tech sector, strengthen the country’s position as an innovator in global markets, and create new green-economy jobs at home.

A $950,000 Government of Canada investment in state-of-the-art equipment for the Carbon Capture and Conversion Institute will help the CCCI to develop and scale up capture and conversion technologies as developers move them closer to market.

In January 2017 the Province of British Columbia contributed $100,000 from its Innovative Clean Energy Fund to support the purchase of equipment for the facility.

While there are technologies available for capturing carbon in industrial processes, they are cost prohibitive in part because of large energy requirements. Government, industry and academic researchers are working to develop energy-efficient, cost-effective processes for industrial use. For example, the Carbon Capture and Conversion Institute is collaborating with two international organizations which are integrating unique technologies to develop a novel capture system that, if successful, will be less expensive to construct and operate than current processes.

A growing focus in the clean tech development world is conversion – which aims to transform carbon into a variety of commercially valuable products. At the new Technology Commercialization and Development Centre, for instance, researchers are converting biomass material, such as sawdust, into a fuel that could be used as a substitute for diesel. This clean technology will have a positive impact in reducing

Canada's overall carbon emissions and optimizing the use of Canada's natural

“These strategic investments from Natural Resources Canada and the Province have allowed the Carbon Capture and Conversion Institute to purchase state-of-the-art process equipment and analytical instruments necessary for clean technology development. We are now able to compete on the world stage and are attracting industry, academic and government developers from across Canada and abroad.”

“We are thrilled that the federal government and the Province of B.C. have invested in equipment at this new facility. The strategic focus of the Carbon Capture and Conversion Institute, which is owned and operated by CMC Research Institutes, is on reducing emissions in large-scale industries. This contribution will allow us to accelerate that mission here in Richmond, B.C. while helping grow the Canadian clean tech industry at the same time.”

forefront of greenhouse gas mitigation and sustainable development. We

inception and we remain committed to its future success.”

“By re-imagining carbon, we can create new industries, good jobs and a cleaner energy future. That’s why our government is supporting innovative research across the country. This includes a $950,000 investment in state-of-the-art equipment and research that could help turn carbon emissions into useful, everyday products.” 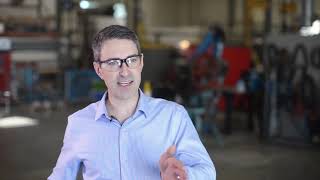 The Carbon Capture and Conversion Institute

Tailings R&D in Collaboration with the University of British Columbia.